May 27 was a great night for Council #10258 as it welcomed two new members into the largest Catholic fraternal organization in the world. Receiving their 3rd Degree honors were Carlos Salas and John Habrzvk at Prince of Peace Council #7983, San Antonio. These two Catholic Gentlemen were escorted to the Exemplification of Charity, Unity and Fraternity by John Fassl, Jim Hackleman, Rick Brower and Grand Knight, Mike Lloyd. Congratulations Carlos and John.​

Council #10258 welcomed Brother Ryan Zimmel into the Knights of Columbus fraternity on 16 March 2021.  Ryan received his 1st, 2nd and 3rd degree status at St. Peter the Apostle Catholic Church, Boerne with Council #10940 presiding over the degree ceremony. Ryan was  accompanied to the exemplification by the council’s Grand Knight, Mike Lloyd, Brother Rick Brower, and his father, Alan Zimmel.  Ryan is the 3rd son of Alan to become a member of the Knights of Columbus. Congratulations Ryan.

​Brother Guy Fusco is the Recipient of 2019 Donnie Reed Award
Geovany Gutierrez attends Knights of Columbus 4th Degree Exemplification Ceremony
May 11, 2019 was a great milestone for one Council #10258's own, Sir Knight Geovany Gutierrez. Brother Geovany was one of 87 candidates attending the Knights of Columbus (KofC) 4th Degree Exemplification held at St. Pius X Catholic Church, Council #4298, San Antonio, TX. The KofC 4th Degree is the visible wing of the KofC, and it demonstrates the principle of Patriotism and encourages active Catholic citizenship. The other KofC principles of Charity, Unity and Fraternity are covered by the 3rd Degree.
The 4th Degree ceremony is a formal event; this event was hosted by Sir Knight Herman Poothong, District Master, Texas Second District Our Lady of Guadalupe Province. The candidates arrived at St. Pius X by 11:30 AM for registration, followed by 4th Degree candidate class pictures. The actual ceremony began at 1:00 PM to 4:00 PM. A celebration of the Mass was held; followed by a social hour with more pictures being taken. A banquet closed out the day’s activities. Sir Knight Geovany was escorted to this prestigious event by Sir Knights' Tom Doebbler and James Hackleman, respectively.  Congratulations Geovany.
​
Council #10258 Welcomes Three New 3rd Degree Knight
Jesse Zimmel Receives Texas Star Recruiter Award
The Wally Butler Family is recognized as the Council's 2018 Family of the Year
Darrell Bay is presented the 2018 Knight of the Year for Council #10258
Jesse Zimmel Attends Fourth Degree Exemplification on 7 October 2018
Don Ritter is Recipient of Donnie Reed Award
Brother Knight Don Ritter is the initial recipient of the Robert Donald "Donnie" Reed Award. Sergeant Major Don Ritter, U.S. Army retired, and a member of American Legion Post 157 was presented this award by Council #10258 during their 19 June meeting. Since moving to the Bandera area in 2016 Don has led the effort in placing U.S. flags on the graves of veterans in Bandera County as part of a Memorial Day remembrance. In a recent interview Don stated, "it is a privilege to participate in recognizing those who gave of themselves, and often sacrificed all, in the name of freedom. This is a must-do to remember those who served before me.”

The award's name is in honor of Sir Knight Donnie Reed, U.S. Army Ranger and Vietnam Veteran. Brother Donnie passed on 04 May 2017, he was an active member of Council #10258 and Assembly #2465. The Donnie Reed Award recognizes Council members who display patriotism and civic duty. Congratulations Don; your activities truly represent the primary purpose of this award, which is to foster the spirit of patriotism and to encourage active Catholic citizenship.
Five Members of Council 10258 Attend Major Degree Ceremony
Five 1st Degree members of Council 10258, to include: Geovany Gutierrez, Paul Esposito, Brooks Pique, George Wilkins, and Kevin Fitzpatrick attended a Major Degree Ceremony hosted by Holy Spirit Council #786, Holy Spirit Church, San Antonio, on 09 JUN. Accompanied by fellow Brother Knights Criss Wilson, Darrell Bay, and Sir Knight Jim Hackleman the group departed St. Stanislaus Church at 7:00 AM and arrived in time for registration and attend a celebration of the Mass. The rest of the morning involved the 2nd and 3rd Degree ceremonies, followed by lunch provided by the Knights of Columbus Council #786.  Congratulations to our newest 3rd Degree Knights. 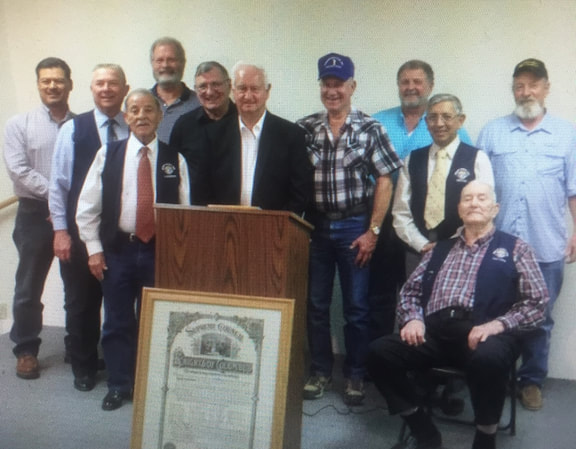 (L to R) Arnie Campos, Tom Doebbler, S. Joe Rodriguez, Ron Schindler, Kenneth Mazurek, Al Kindla, JM Clements, Rick Schindler, George Flores, Roy King and Bill Broomall. Not pictured: Joe LaLanne, Tim LaLanne, Eloy Palacios, and Doug Morneau.
Membership in the Knights of Columbus is open to practicing Catholic men in union with the Holy See, who are at least 18 years old. A practicing Catholic is one who lives up to the Commandments of God and the precepts of the Church. Application blanks are available from any member of the Knights of Columbus.

Contact Shawn Groff at sgroff@stic.net for more information on joining the Knights.

Who Are the Knights?
The Knights of Columbus is the world's largest Catholic family fraternal service organization with 1.7 million members. It provides members and their families with volunteer opportunities in service to the Catholic Church, their communities, families and young people.

How to Join
Membership in the Knights does not require a great deal of your time but any time spent will return many times as much satisfaction.  One meeting a month, lasts from an hour to an hour and a half; Friday night fish frys during lent and each 1st Friday of the month, even a couple nights of help are appreciated, more if possible.  There are other events to get involved in but the foregoing are the biggest demand of your time.

4th Degree
Any Third Degree member in good standing, one year after the anniversary of his First Degree, is eligible for membership in the Fourth Degree. The primary purpose of the Fourth Degree is to foster the spirit of patriotism by promoting responsible citizenship and a love of and loyalty to the Knight's respective countries through active membership in local Fourth Degree groups (called "assemblies"). Certain members of the Fourth Degree serve as honor guards at civic and religious functions, an activity that has brought worldwide recognition to the Knights of Columbus.  4th Degree Knights from Bandera Council, along with Sir Knights from Kerrville and Fredericksburg constitute Hill Country Assembly #2465.

Ladies Auxiliary
The Ladies Auxiliary s main function is to SUPPORT the men and the council. They do this primarily by providing help at events, cooking for events and providing monetary help. They also generally do help with setting up and beautifying the hall for events.  Council #10258 does not currently have a Ladies Auxiliary.